Once there was a stray cat that dwelt within a town. A miserable life of scrounging and prowling for scraps. Decried by the town dwellers as accursed and bedevilled; the cat was shunned to the margins of the town where miscreants and poor lived alongside each other. The cat could be found by moonlight only, with light enhancing the matted fur and ripped flesh. He was of sorrowful appearance to the eye, with little to attract care or compassion.

On the outskirts of the town dwelt the less prosperous inhabitants of the place of cherry blossom. The sakura and the kiku, the vivid pink and purple Chrysanthemum that interlaced the town with sparks of colour; gave even the dankest place the scent of fresh spring; bringing clarity to thought and reason to deed. The town was blessed thrice with a fresh spring that delivered pure, crystal water to the town dwellers in abundance. The cat shunned from the communal well; was left to drink from the dregs of washing water thrown onto the street. The cat’s coat neglectfully rusted year after year condemned the cat to ever be known as Akaname, the filth licker, by the disgusted local folk.

Surrounding the town lay lush pasture and fields, where those without land laboured for daily allowance. Of the men in the fields worked Hiruko, the young son of a fisherman who had married a local beauty not a year past. They lived together in the town among the poor people, with meagre provision but bountiful love. For since marriage, fortune had yet to shine upon Hiruko and his wife Purasume, with golden rays. Their hearts filled with enchantment for another with time spent together delicately enjoyed and savoured. Their love bloomed softly. 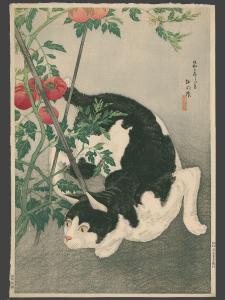 Every night on return from toil in the fields, Hiruko would stoop to pet Akaname. His heart so filled with love that it pierced the cat’s inhospitable nature. Akaname became known to Hiruko as Maneki-Neko and he prayed as he stroked the cat each night for prosperity for his family and for the cat. The cat soon took to following Hiruko home of an evening, to the hovel he lived with Purasume. Upon first sight, overcome by sour looks, Purasume could not take to Maneki-Neko; but soon, the soothing purr melted her heart to the stray cat. Maneki-Neko was to stay with the poor couple, eating from scraps with barely enough food for all. Purasume would stealthily save a mouthful of food back from the meal to share with the cat. Hiruko did likewise, unaware of his wife’s elicit offerings.

The sakura floated on the winds. A knock came and with it a Bailiff of the local Lord. They were to vacate the hovel immediately. No haste was wasted in gathering possessions.

‘Where should we go? Without a home we are homeless.’

‘It is not of our concerns. This hovel pays but small penance for such luxury. New renters are willingly waiting and want possession immediately. Do not tarry any further in this place.’

The Bailiff would hear no plea; ears deafened to all as the couple left and walked among the cherry trees clutching their belongings. Hiruko set his burden to the floor and took Purasume in his arms.

‘Do not worry my beautiful flower. Fortune is sure to shine golden rays on us soon, my exquisite wife.’

Picking kiku and setting it behind his wife’s pale ear, pushing back her dark hair; Hiruko took stock of the situation. They had lost their home but not their hope or love. Next to a fountain stood a gentleman of some worth. His clothes were of fine cloth, weaves of green and red; interspersed with golden brocade. He was petting Maneki-Neko. The cat had grown healthy under the care of the kind couple; his fur once again glorious and exuberant. With a glossy mane and a shine in his eye; Maneki-Neko was a fine cat to look upon. The gentleman was enchanted and beckoned the couple forth.

‘I could not help but overhear of your predicament. My name is Akinai and I am left in a quandary that perhaps may be of some interest to you. I own a farm on the outskirts of the town, a peaceful place of greenery and abundant life. But, alas, my farmhands have left me bereft. The work is hard and the hours long; but there is a cottage attached that is vacant. If I could make of you the offer to come and work on my farm; I would be honoured to have the company of such a fine cat as this take possession of the cottage. That is my offer unto you.’

Akinai was slender of girth, with a build more suited to clerking that tilling soil. Hiruko looked into the eyes of Purasume; she looked back with anxiety and dreams. He responded with no further contemplation.

‘We shall take up your offer sir.’ 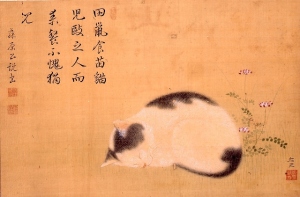 To the farmstead they made; Akinai the business man with Hiruko and Purasume the young homeless paupers. Behind trailed Maneki-Neko with proud tail high in the air. The cottage was dilapidated but homely. Purasuma got to work on furnishings whilst Hiruko worked the fields of Akinai. Month after month Hiruko worked and toiled the fields bringing forth great riches from the thriving soil. Akinai watched from his study in the farm house. The bronzed figure of Hiruko, with short dark hair and stocky build bent over plough and shearing with scythe. One fine day with the cherry blossom conducting a rhapsody of pink, Akinai came down to the fields and beckoned over Hiruko.

‘Once again perhaps I can make an offer of interest to you. My next door neighbour is old and frail; he is to move in with his daughter and her family in the town. The farm is for sale, it is as fecund as my own with house to match. I would be honoured to offer the friends of the cat and the most able worker of mine the money to borrow for purchasing the property. That is my offer unto you.’

Hiruko begged time to consider. At the end of the day, returning home he ate in silence. Not until they were sat feet to hearth with Maneki-Neko curled in his place on Purasame’s lap did Hiruko talk of the offer. Purasume consented immediately;

‘My husband; these are the rays of golden fortune shining upon us. We are blessed.’

The next day Hiruko strode to the farmhouse and spoke again with Akinai, confirming his offer. Purchase was made with deeds signed and the young couple became the owners of a flourishing farm. Around the fields, cherry blossom granted auspicious blessings. Maneki-Neko followed them to the farm and made his place in the dappled shade of a silver birch. Hiruko and Purasume worked long and hard and were prosperous; yet without children, Hiruko worried about where their legacy would fall. Each day in the fields he blessed the crops and asked them for growth in return.

One night returning from toil; sat comfortably before the blazing fire, Purasume sat languidly on a chair, the flames reflected in her high, beauteous features. As usual Maneki-Neko was curled up asleep on her lap. The night grew dark and shadows lengthened. Hiruko yawned and turned to his wife with thoughts of sleep and the new day.

Purasume beckoned Hiruko to her.

Lost in each others arms all night, the young lovers did not notice Maneki-Neko wake in front of the fire. With a stretch of stiffened limbs, he trotted silently to the door and left the farmstead. 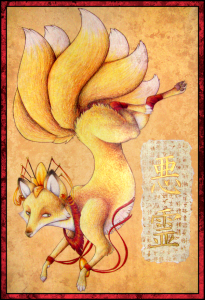 The inhabitants of the local town still talk of a magnificent cat walking the streets at night; but with three bushy tails, each tipped with white rather than one. The couple never saw Maneki-Neko again; but held his memory fondly to their hearts. Each farm cat from thereon was named for him and treated with great kindness and compassion into old age.

Years later; Hiruko long since returned the money borrowed from Akinai stood talking to the now aged business man at his gate.

‘Good day to you my old friend. How fares you and your family?’

Hiruko swelled with pride as he talked of his first born, a daughter called Sakura who had begun at the local school. His further three children; two boys and a girl were all the apples of his eye. Hiruko spoke at length of their foibles and adventures; and of Purasume and her beauty. Before the conversation drew to a close, he asked of Akinai a question:

‘My oldest friend; I never did ask a question that does not trouble my heart but to sate my curiosity – why were you so kind to me and the beautiful Purasame?’

‘You forget the wonderful Maneki-Neko! Well, the story is long and for another time; the light grows dim and to house and hearth we should retire. However, I will tell of this: once I was but a poor businessman, a shop keeper. My shop was filled with trinkets of wonder from all over Japan. The best craftsmanship made with the patience of time. Yet no-one would enter my shop and I remained poor. One day, a cat not unlike the delightful Maneki-Neko was scratching at my door. Well now; I took him in and fed him…’