Outside in the cold February air, their breath forming clouds of white mist as they stood at the entrance of the Regency Asylum for the Mentally Disturbed. Before them was a horse and carriage, waiting to take them to the Bottomley’s offices on Regent Street. They spoke little on the journey through London. Richard sat silently gazing at the back of his hairless, unblemished hands. Randolph would occasionally flit between looking out the windows at the expanse of city and before becoming overawed and clasping a hand to his eyes, closing them away from all invasions. It wasn’t until they were safely sat in comfortable, plush red velvet chairs, brandy in hand before a roaring fire at the office that they spoke. Richard began:

‘So brother, what exactly happened out there?’

‘I- I honestly don’t remember Richard; it’s as if a portion of my memory has been cleaned right away.’ Randolph took a sip of brandy before continuing; ‘I remember making passage to the Plateau but that’s about it. There were few companions, I- er hear that one of them met quite an awful end?’ His voice had returned to a rich sonorous quality yet quavered on the mention of his ex-companion and guide.

‘Indeed, they said it was the work of a local witch doctor or the like. Either way, whatever happened out there I’m sure you did what you needed to survive and in God’s hand you must dwell brother! For surely you should have died from exposure on the Plateau or by disease or a thousand other causes!’

‘The journey home is also a blank sheet too, I’m afraid.’ Randolph finished his brandy in glum contemplation before leaning into the fire to warm his face. The fire flickering; drawing him in closer with its luminous dance.

‘Whatever happened out there big brother;’ started Richard leaning over and clasping his brother’s right knee; I’m just so awfully glad you’re home and safe and lucid once more. It was a catastrophe to see you in such a state.’

‘Are you certain you have no memory?’ pressed Richard once more.

‘I tell you Richard I have no memory! Lord knows what happened out there. I remember the expedition, peasants and donkeys and a guide called Charles.’ Randolph smoothed his hair down to his neck, resting his linked hands on the back of his neck whilst scrutinizing his mind for but a clue as to what happened and how he ended up in the Regency.

The door bell rang, a visitor had arrived. Here to talk business, Randolph sat back and watched his brother discuss investments at length before concluding the meeting. Richard was filling the briefs when his brother disturbed his reverie:

‘You’ve grown rather good at this little brother,’ stated Randolph affectionately; ‘I’m glad the business is in such capable hands whilst I’m abroad, it is most reassuring.’

Richard smiled broadly; ‘Father is quite taken with the idea of me staying on in London; he would like you to go home where you can recover in more peaceful circumstance than the hustle and bustle of city life. It seems a charming idea, especially from father.’ Richard gave Randolph a long look and then resumed pushing together his papers on the desk.

Sir Randolph seemed unsure, fresh glass of brandy in hand he set another down for his brother. ‘I’m not sure that is such a wise choice brother,’ said Randolph quietly; ‘although the fresh air and rest would do much good for my strength; there’s surely constituency business to attend to at Parliament?’

‘All taken care of; honestly ‘Dolphy go to the countryside, get some rest and get well again. Everything is in hand I promise.’ Richard smiled reassuringly.

‘I suppose you are right, Dicky.’

‘Yes, as usual my sensible little brother.’ Randolph sighed. Draining his second glass of whisky, he placed the empty glass down on the desk between them. He opened his mouth to speak but Richard got there first:

‘All taken care of, I told you ‘Dolphy you’re in safe hands now. I’ve booked you horse carriage for Manchester at first light, from there passage on a canal barge to Maes Pennant. Father will be expecting you shortly and I promise to endeavour to make an appearance before summer’s end. Tonight, you shall stay at Brown’s in Mayfair and first thing make haste for Manchester.’

‘What of Parliament?’ asked Randolph in a querulous tone, quite unused to his brother’s newly acquired assertive manner. Richard pushed back his hair nose quivering; a strand fell back across his face and came to rest against a high cheekbone.

‘Parliament be damned man! They’ll wait until you’re better; you can rejoin session following the summer recess. The Party will understand and Father can help with constituency duties in Wales. It couldn’t be simpler ‘Dolphy, just head on home and get better.’

His glasses had come loose and began to fall to the ground; Randolph stepped in and caught them. Passing them back, Richard replaced them on his pointed nose and pursed his lips.

‘What ever would I do without you Randolph?’ he said with a straight face. Randolph’s lips open and out came a veritable flood of good humoured laughter; Richard joined in, the break in strain on his older brother’s face showing, wild red hair tilting and wobbling with each chortle.

When the final wheeze of laughter faded and his breath was regained; Sir Randolph turned to his younger brother and said; ‘Well so be it Dicky; to Brown’s I shall go!’ He slapped his thighs and hugged his brother tightly before the carriage that took them from the Asylum to the family offices faithfully whisked away the Member of Parliament for Clwyd to the new and fashionably debonair Brown’s Hotel in Mayfair, opened the same year the reign of the current Queen, Victoria began in 1837; where he proceeded to spend his first night of freedom from captivity drinking gin and playing cards in the lobby.

With the first light of morning came a knock at his door. A horse and carriage waited outside the Hotel; this was to be his transport to Manchester before the onward boat trip to Wales. After passing his valise to the coachman, Sir Randolph stepped inside. His companions for the journey were an elderly couple both dressed in black. The husband with jowly face and sagging eyes looked as though he was melting away; thin grey ear length hair upon which sat a soft top hat made of felt. In a velvet black overcoat, riding breeches and dusty boots he sat with his gaze fixed the entire journey on the seat adjacent to Randolph. Crushed up tightly to her husband, the wife had a pudding face, podgy with soft grey curls escaping from underneath her black wicker bonnet. A solitary pink rose the only embellishment on her bonnet; wearing a simple black dress and boots and holding her bag closely under her nose, should mayhap Sir Randolph make a grab for it while she was unaware. The wife stared intently to the point of rudeness, her sunken eyes making her face appear doughier and more porridge like in semblance. They neither spoke to one another nor Randolph, so he made do with watching the scenery pass by and adjusting his weight with the shake and crack of cart wheel against uneven road.

They made good time in the first day and made stop some thirty miles or so from London at a place called Biggleswade not far from the university town of Cambridge. Mentioned in the Domesday Book, the quaint Bedfordshire market town was still bustling come evening. The inn did a roaring trade with local merchants, farmers and labourers. The hustle of bodies and the smack of work boot against wooden floor created enduring warmth of invitation and companionship. Sat by the fire with wine in hand, Sir Randolph surveyed the room from his comfortable nook and took interest in the local characters of note.

A vagabond of sorts, dressed in greens with a boot raised up on a bench was regaling a group with a tale. Beyond Randolph’s range of hearing, he watched the crowd sway back and forth with the demonstrative arm movements of the story teller. They were utterly enthralled to the fiction. As the story teller wove, a lad wearing an oversized black flap cap approached the crowd stealthily from behind and relieved the listeners of their purses without being caught. Glancing sideways back to the teller he made a slight nod and sauntered away, melding back into the crowd of the inn. Later, now wearing his black cap; the story teller with arm around lad drank to the health of the patrons one and all. The lad grinned toothily and drank back his ale with great gusto.

And so the monotony of travel continued with further dreary stops along the way to Manchester. Neither the husband nor wife acknowledging his presence or deeming him fit for civilised conversation, Sir Randolph remained, in moody silence with the black claws of despair grasping at his nerves. The shuddering journey was uncomfortable and he felt as though he was still in motion, even at night abed.

Not far from Manchester, over the stark and beautiful Pennines’ sat the sleepy town of Hazel Grove. Not long changed name from Bullock Smithy some seven years ago; Hazel Grove was one of the new prosperous satellites of the industrious Northern engine room of Manchester. Hazel trees lined the streets as Randolph walked alone, taking in the night air before retiring for the evening to his bed at The Bullock Smithy Inn. A game of cards had begun as he left the hotel and he pondered joining them for a time. The moon was bright over the northern town, tomorrow they would make for the city and for his connection with a canal barge to Maes Pennant, the Welsh ancestral home of the Bottomleys. 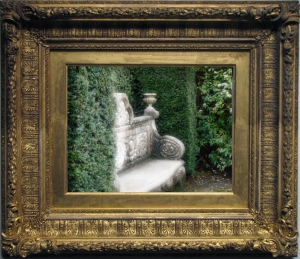